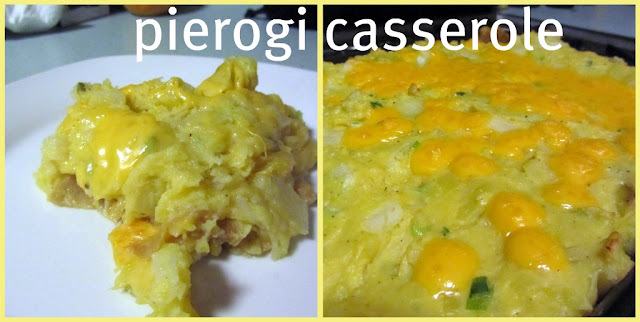 i found this AMAZING recipe on How Sweet Eats, and i know i had to make it immediately. slight problem, i was heading to cancun two weeks after this posted, and this is not the most healthy recipe in the whole world. but you better believe i book marked it on my delicious site and made it immediately after returning. it is absolutely the most delicious potato thing ive made since the blue cheese mashed potatoes i made for christmas...and i am not a potato fan.

ok let's stop putting off the goodness, here is the recipe, slightly adapted.

8 medium yukon gold potatoes, peeled and cut into fours
2 medium onions, chopped
1 bunch of green onions, chopped thinly
8 ounces of cheese, cubed or shredded (I used 2% sharp cheddar - and used about 12oz)
1/2 pound pasta (whole wheat lasagna noodles in our case, but almost anything will work)
1 1/2 sticks of light butter (had to tone it down a bit)

Preheat oven to 350.
Peel potatoes and chop into quarters. Set them in a large pot and cover with water, allowing it to come to a boil. Boil potatoes until tender, about 30 minutes. While potatoes are boiling, cook pasta according to directions, and once drained mix with two tablespoons of butter. (i forgot this, so i just cut it up on top of the noodles - worked just fine) Set aside. In a large skillet over medium heat, melt two tablespoons of butter and saute chopped onion until soft, add green onions and saute for another minute or two.
Drain potatoes and mash with one stick of butter and cheese. Make sure no lumps remain. Fold in onions.
Spread out pasta in a large baking dish and spread mashed potato mixture over top. If desired, top with more cheese and onions. Bake at 350 for about 25 minutes. This is best when served immediately, but still tastes good after being in the fridge for a day or two (if it lasted that long.)

how many people have came and LOVED my blog ?